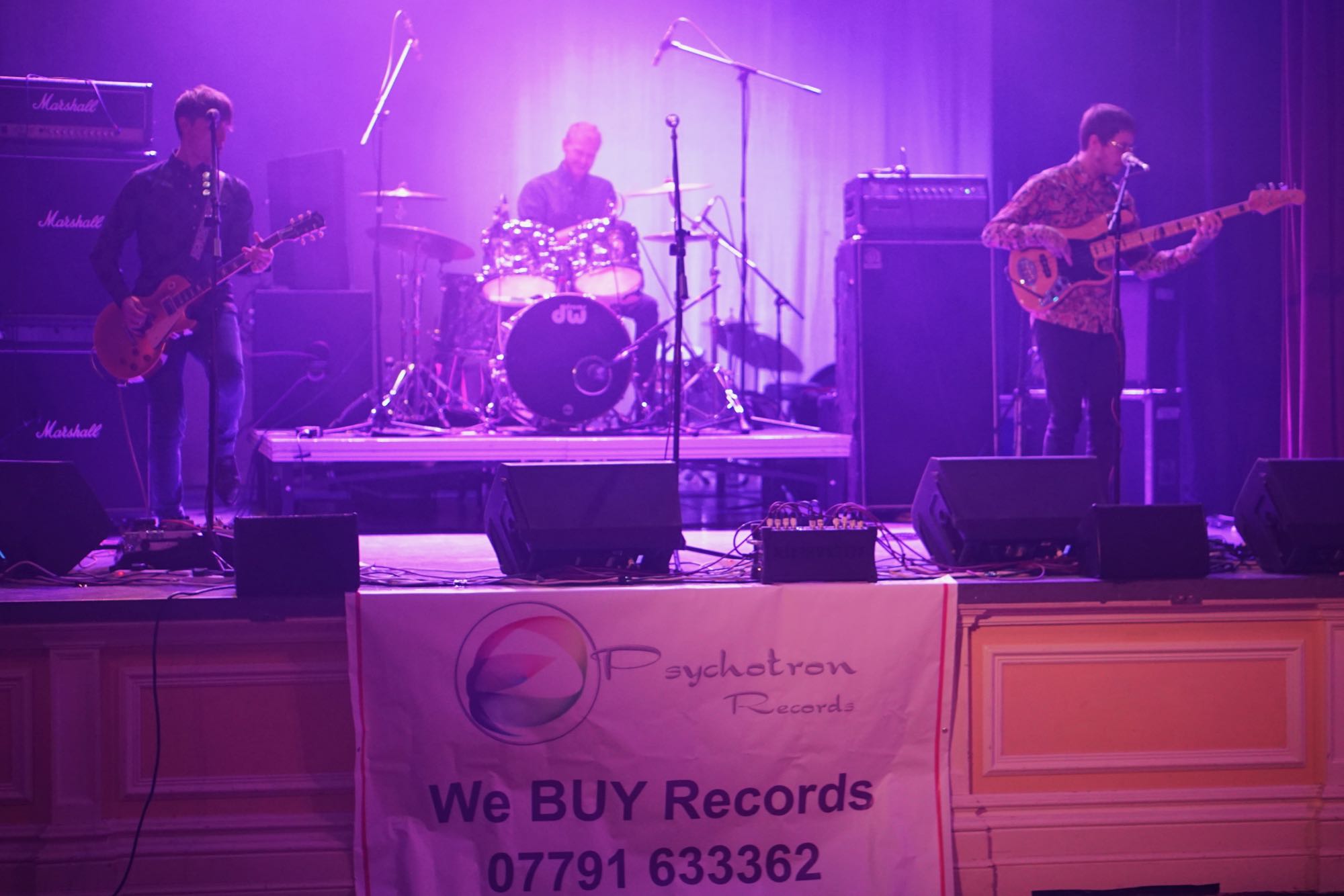 What an amazing evening at Sutton Coldfield Town Hall. Psychotron Records were proud sponsors of this great event celebrating the legendary Mothers Club of Erdington.

Visitors from all over Birmingham and the Midlands, as well as other parts of the UK and Europe, including a friend of Psychotron from Germany.

The enthusiastic Dave Gordon pulled the event together by contacting and booking all the bands. Dave prepared some great memorabilia boards around the room. The bands that played in there bringing the spirit of the Mothers Club into the 21st century. Psychotron Records sold about 400 tickets for the event which sold out a couple of weeks before the day.

We are great supporters of live music and were delighted to hear some of the new talent of Birmingham. We hope that some of these bands might appear in the Psychotron shop in Boldmere soon? We left the gig clutching copies of EPs from Brainfood, You Dirty Blue and The Mighty Young.

Review of the great live music

Opening the evening was RITCHIE DAVE PORTER. A very talented guitarist raised the spirits of the crowds pouring into the bar from the cold with his fantastic blues rock. He was followed by SHAKEY VICK who’s only album was recorded live at the original Mothers Club in 1969. What an amazing blues harmonica sound – definitely the best we’ve ever seen.

YOU DIRTY BLUE really caught our eye. Leon and Martin are a local pair from Tamworth. They are a guitar & drums combo and they went down a storm. We are very much looking forward to seeing them again at the Off The Tracks festival in September. The Roger Chapman styled vocal delivery was welcomed by those who remember the old days. You Dirty Blue look like a band on the rise having played at Glastonbury already and supported Wolf Alice.

THE MIGHTY YOUNG, a great garage rock duo from Birmigham were next to play the second stage. What a great guitar/drums combo with wild blues/indie vibes – we can’t wait to hear what they do next.

THREE KNUCKLE SHUFFLE were a very energetic combo. They had a doom rock with Sabbath influences sound, riff laden with hooks aplenty.

BRAINFOOD are a young band ploughing their own furrow. A psychedelic rock vibe with jangly guitars and treated vocals giving a spacey production.

NONSUCH rocked a King Crimson vibe, and gave a great performance to finish off the event. Their drummer, Jacob Hall also sang – not something you see done very often and yet also very reminiscent of that early rock vibe.

BLUE NATION opened the main stage with an amazing set. They are a local band with firm support and filled the bid stage with a big sound. Their new album is on its way – and on vinyl too! We are hoping to see them play instore when the LP arrives. Following them on the main stage were bands that had previously played at the original Mothers Club in Erdington.

EDGAR BROUGHTON played a solo set. He’s still got an amazing voice and gave us a wonderful set.

THE GROUNDHOGS were possibly the most popular band of the night if audience reaction was anything to go by. They gave a storming heavy acid blues set of early tracks from Split/Thank Christ era.

Stan Webb’s CHICKEN SHACK were on form – he has not lost his amazing guitar skills and that bluesy vibe.

The evening would not have been complete without STEVE GIBBONS BAND – Birmingham stalwarts and an incredibly popular character. They gave a laid back blues rock set which included a Dylan cover: Along with Dave Pegg, Steve Gibbons forms the Dylan Project.

Soft Machine, led by John Etheridge who had managed to secure a replacement saxophonist at the last minute, were the headline act. This was Prog Rock at its finest. Also appearing were the pioneers of the New Wave of British Heavy Metal Sound (NWOBHM) QUARTZ. Playing with them was Micky Hopkins the amazing guitar player who used to be in LEMON TREE, a popular Brum 60’s club band.

The original Mothers club was heralded as the best rock club in the world at the end of the 1960s but was only open for three years. During its short life many big names played there including Pink Floyd, Led Zepelin, Fleetwood Mac and Black Sabbath.

Here’s to the next one!

The Super Rare and the Super Expensive

What’s the Rarest Record You Own? This was a question that was posted in the Psychotron Records Facebook group ...