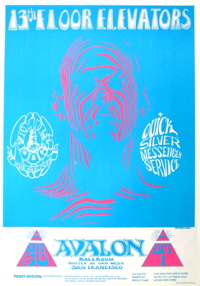 On this day we say goodbye to Roky Erickson, the master of psychedelia. A good time to reflect on the impact he and his band had on the music scene that we all enjoy. The 13th Floor Elevators were the first band to attach the label ‘psychedelia’ to music with their debut album, ‘The Psychedelic Sounds of 13th Floor Elevators’ in 1966. The band from Texas are pioneers of the psychedelic sound of the 1960’s that influences music to this day.

The 13th Floor Elevators put out 4 albums between 1966 and 1969. Erickson’s excessive drug habit and mental health problems were a big factor in the dissolution of the band. He continued to make music in between regular institutionalisation and treatments for schizophrenia. The Elevators reformed for one last performance in 2015 at the Levitation Festival in Austin. They will forever be remembered as classics in the psych-rock music genre.

The 1960s was a decade of revolution and change in politics, music and society around the world. The 1960s were an era of protest. In the civil rights movement blacks and whites protested against the unfair treatment of races. American politics was under threat with the assassination of JFK in 1963, followed by his brother and Martin Luther King in 1968. Towards the end of the decade more and more Americans protested against the war in Vietnam. Society was struggling to uphold traditional values and the youth movement started looking for ‘something different’ and for many the psychedelic sound had a big part to play.

13th Floor Elevators were occasional headline act at the notorious Avalon Ballroom in San Francisco, California. The Avalon operated from 1966 to 1968, and reopened in 2003. In the 1960s at the Avalon, two bands typically performed two sets during the evening. Many local bands played, such as Quicksilver Messenger Service and the Steve Miller Band. The Butterfield Blues Band, and Big Brother and the Holding Company, were organized around singer and performer Janis Joplin in spring 1966. Joplin and Big Brother performed in June 1967 on several occasions.

Bands were frequently booked to perform at the Avalon on Thursday, Friday and Saturday. Extraordinary posters advertising each event were produced by psychedelic artists such as Rick Griffin, Stanley Mouse, Alton Kelly and Victor Moscoso. In our Spirit of the Sixties range of cheap posters we sell a reproduction of the Mouse/Kelly poster ‘Zebra Man‘ designed for a 13th Floor Elevators gig also featuring Quicksilver Messenger Service.

So RIP Roky. Your legend lives on in your music.