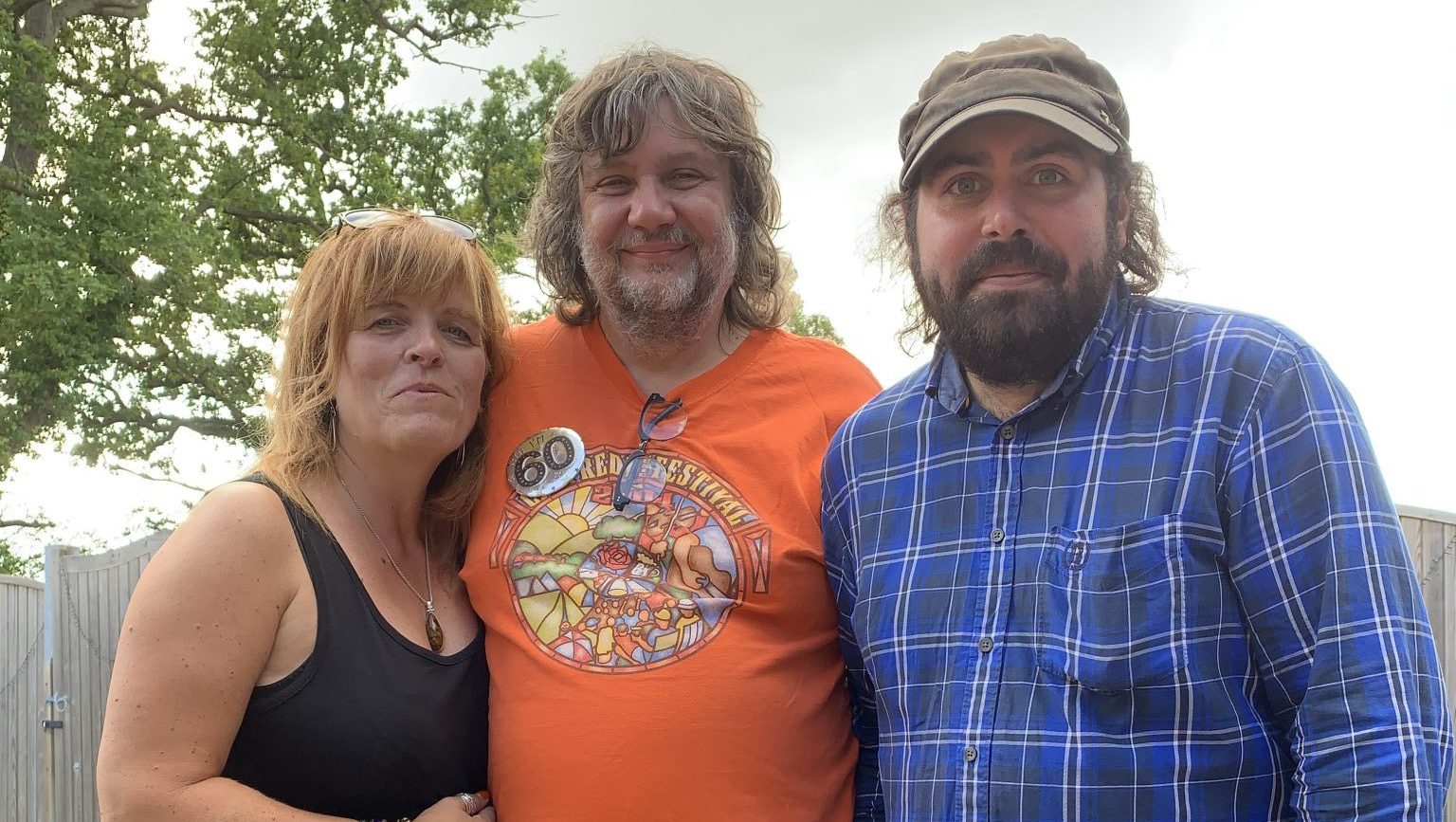 Misty’s Big Adventure performed this weekend at Off The Tracks festival. Before the gig they popped over for tea and cake to celebrate Pete’s birthday. This was a great chance for a quick catch up.

Pete do you remember when you first heard Misty’s Big Adventure?

I went to a Stuart Maconie ‘Freak Zone‘ live event at the Glee Club in Birmingham December 2008. They were broadcasting part of the radio show and had two live bands on. I remember Misty’s Big Adventure and ZX Spectrum Orchestra. Misty’s Big Adventure caught my attention visually at first – they are a great live act with a strange dancing monster on stage, three girls in the band and an unusual front man. They were interesting to watch and the music was quirky. When I went home I investigated where they were next playing and went to see them shortly after at the Hare & Hounds in Kings Heath. Following that I bought all the music and I have grown to love the sound immensely.

What is it about the music? Can you describe it?

The sound is different and I love anything that is different. They are quirky and the sound is accessible. However, it is very hard to describe. That is probably the point as to why I like them so much. There are elements of prog, punk, reggae, ska and other sounds. The lyrics are witty without trying to be too clever; but with a message even if its ‘look at me I’m mad!’ I find that all the songs are hummable and melodic.

How often do you see the band?

As often as I can when they gig in the Birmingham area. They perform a Christmas gig at the Hare & Hounds every year. I have been known to leave a party and disappear to the gig for a few hours. It has become an essential part of my Christmas. I find a Misty’s Big Adventure gig an uplifting occasion and I always leave them with a smile on my face ready to face the world.

Gareth can you remember meeting Pete for the first time?

My brain is fairly war torn but I think I first met Pete at Moseley record fair around 3 years ago. As I recollect Pete mentioned the idea of releasing our compilation the first time I met him. But we do everything at our own pace hence it only just coming out!

Pete, when did you contemplate putting them onto vinyl?

I have been a huge fan for over ten years and I have always wanted Misty’s Big Adventure music on my favourite format. They had only released one album on vinyl previously and I wanted more. So when I put my first record out on my own label in 2013 I knew that I needed to try to make this happen. This became a personal crusade to pull together these songs and put out the sounds that I love. Some might say that I pressed 299 more than I needed to but I know that other people will love the band as much as I do.

How did you put it to Gareth?

I first spoke to him after a gig but knew that it was unlikely to have registered first off. I found him online and sent him a message. His initial response was positive but he kept asking, “are you sure?”. The conversations were about all sorts of potential projects before settling on the compilation. Gareth was keen on an anthology of the band for their 20th anniversary. Fortunately this was superceded as the band were 20 a couple of years ago! The dialogue continued with gentle encouragement and patience on my part as Gareth had to talk to the band and get agreement on what songs to feature, the track listings and so on. And then he needed to find the master tapes.

Gareth, you mention meeting Pete at a record fair so you must like the vinyl format? What does it mean to have your music on vinyl again – it’s been a while?

It was always frustrating back in the noughties that most of our music didn’t end up on vinyl but CDs were generally what most people wanted. There is no doubt in my ears they sound much better (on vinyl), less harsh and more audible frequencies. When I got the test pressings I heard things I hadn’t since I mixed them. I’ve collected records since I was 10 so I obviously always wanted to have our songs on that format. I remember how exciting it was when our first 7″ single came out, playing it at the wrong speed and doing bad scratching with it. I don’t think that excitement ever really fades having your music on vinyl. It makes it feel more real and they might actually survive over time. I only do this for the immortality! My musical education came from records because they were so cheap growing up that I could afford to take risks and buy things I had no idea what they would sound like. This helped me get into all sorts of different genres and weirdness! All the band are very happy to finally have these songs on record for the first time.

Pete, how would you describe the relationship?

I was happy to wait for Gareth for as long as it took. He is involved with many projects, writing soundtracks and theme tunes. He has a clear idea about what he wants to happen to his music and needed to be in control. I was absolutely fine with this because of the joy of doing the record. Gareth has a broad fan base of younger student community and older guys like me. Dave Gorman is a big fan of the band and uses their music as the interval music at his gigs and backing tracks for his YouTube videos. Gareth wrote the theme tune for his TV show ‘Genius’.

What do you think of the final product that Psychotron have released Gareth?

It couldn’t be more deluxe! And I’m pleased it’s a double LP as it hopefully represents the variety of what we do. When I listened to it the first time I was actually blown away by how good the songs sounded and I’m definitely our harshest critic! The artwork is by the artist Tanya Meditzky who did our first album. I asked her as I am a massive fan of her work and I liked the idea of things coming full circle. She’s done an amazing job, even the labels are beautiful and there is a bonus poster included! And of course the red and blue vinyl was the icing on the cake. It should come with a vat of Gaviscon. Couldn’t be happier and I’m very grateful to Pete for his enthusiasm and drive to make this come to fruition. Read my own blog post here.