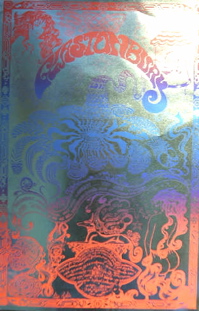 Our Spirit of the Sixties range has a few festival inspired posters.

As this is Glastonbury weekend (hard to believe with the sun shining), we are reflecting on where wonderful festival events originate. Festivals have inspired some wonderful art over the years and we have several posters that take their inspiration from festivals. We prefer smaller festivals and recently started the season at Bearded Theory at Catton Hall, Derbyshire. We have for many years attended Cropredy in Oxfordshire and finish the season at the Off the Tracks festival in Donington. This year we are adding a few more, including the 17th dream of Dr Sardonicus in Cardigan at the beginning of August which is the annual event from the Fruits de Mer label.

Our lovely Boldmere community has a street festival twice a year. The summer festival on Sunday was a fabulous event. The shop was open all afternoon playing music all day.

This Glastonbury poster has strong 60s imagery but the design is from 1987. The poster is littered with inspirational quotes: “No one is given a dream without the means of fulfilling it“; “Nothing is at it appears,.. or what is seems to be” “Tomorrow goes missing, but who cares?!” It is printed in shades of red and blue on silver foil paper. Gorgeous!

The Monterey poster has a rainbow of psychedelic colours with 1960s inspired illustrations including Janis Joplin.

The Woodstock poster “These are the days my friend” features a list of the performers at the original festival in 1969. We also have a 14 hour Technicolour Dream reproduction poster.

We watch hours of television coverage rather than attend Glastonbury – but maybe one year? The story of the origin of the festival is reported every year. Michael Eavis gave refuge to musicians in 1970 – the same year that Jimi Hendrix died. Glastonbury stays true to the values of the hippy era.

Where and when did festivals start?

The Summer of Love in the mid-1960’s kick started festivals with the Monterey International Pop Music Fesival. Held in California over three days in 1967 this was probably the first festival of the type we know and love today. It attracted about 25000 poeple and featured performances by the Jimi Hendrix Experience, The Who and Janis Joplin and introduced Otis Redding to an American audience. Against a backdrop of political unrest and social change, the hippy movement gathered momentum drawing fans of rock, folk and blues music together in a counterculture movement that spread from America to Britain.

In Britain in 1967 the 14 hour Technicolour Dream event took place at Alexander Palace. Hosted by the International Times, this was a Free Spirit Benefit event headlined by a new band Pink Floyd. Pink Floyd had their break the year before playing regularly at the underground psychedelic UFO Club.

Two years after Monterey, the first Woodstock festival took place in upstate New York. This festival had a huge crowd; estimates were just under half a million festival goers. This festival hit the news and put festivals into mainstream consciousness.

In the UK, the first Isle of Wight festival took place in 1968 with a small crowd. This quickly grew to over half a million people by 1970 when The Doors, Joni Mitchell and Leonard Cohen performed.

The Holy Grail — Is it an Ozzy Osbourne acetate??

The Holy Grail — Is it an Ozzy Osbourne acetate?? What a strange week this has been and all ...